an alternative explanation to the Pendulum Motion

What gestures do you make with your body when you are thinking?

I cross my legs, pull my foot out of the shoe and dangle it.

Since I’m a curious person, I tried to investigate this thing and I found out that it has a name, it’s called dangling! So now I can say it with scientific precision: when I am focused on a problem and I analyze it to find the solution I do the Dangling.

After being surprised by this movement, which I involuntarily do when I’m thinking, the Data Scientist soul in me immediately searched and found an analogy with the scientific world: the oscillation of the shoe can be associated with the motion of the pendulum!

The same Galileo in ‘500 arrived to the discovery of the isochronism of the pendulum observing the motion of oscillation of the chandelier of the cathedral of Pisa.

Later in the 1600s, Huygens used the pendulum as a regulating mechanism for clocks, building the pendulum clock.

Then I can deduce that dangling is my method, I admit it … quite personal, to measure time, my pendulum clock 🙂

I then experienced that the Dangling also follows the rules of pendulum motion, that is:

1) period is independent of the angle

If we dangle the shoe and measure the times, we notice that, to make a number x of complete oscillations and then for the next x, the two times are equal despite the amplitude of the angle decreases progressively

2) period is independent from the mass

Whether we wear shoes with or without plateau, therefore of different weight, with the same foot length and with the angle of oscillation fixed α, it is observed that the period is always the same.

Therefore, those who wear a larger shoe size take longer to perform a full dangling lap than those who have a smaller shoe size. From which we deduce that dangling also respects the formula of the pendulum period because it is dependent on the length:

In conclusion, the Dangling respects all the rules of pendulum motion.

This analogy reassured me: the Dangling measures my concentration time for solving problems. Therefore, with the same type of shoe and number, the less time dangling is the greater my productivity … Amazing! The Dangling has just become my efficiency index 🙂

Apart from the bizarre similarities or the funny examples, what I can conclude at the end of this short funny article is that the Data Scientist is really a fascinating work because it allows you to find analogies with worlds often different from the one you are studying and make scientific applications always and in everything … also to measure your efficiency index.

A new postulate from your #datascientistinhighheels … what method do you use to concentrate?

What happened to Access?
Artificial Intelligence and Esports
The Model Thinker
The beauty number
Data Analysis with Excel 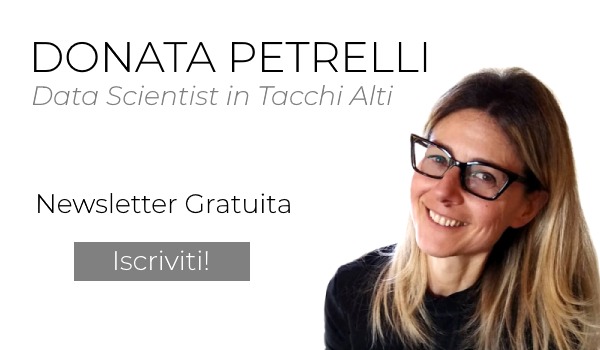